CLP Power is one of the world’s largest utility companies. A member of the prestigious Global Dow and Dow Jones Sustainability indexes, CLP Power provides electricity to more than 80% of the population of Hong Kong, along with numerous other regions across the continent.

Founded in 1901, CLP Power has been operated by the same family for almost a hundred years. As well as operating plants across China, India, Australia and much of Southeast Asia, CLP Power has been a pioneer in renewable energy generation, having generated 5% of its energy through renewables by 2007, and committed to phasing out coal investments in 2019.

Invicta was asked to design and supply jet fire rated barriers to be installed at a new offshore LNG import terminal, located in the southern waters of the Hong Kong SAR. This terminal would allow liquid natural gas (LNG) carriers to deliver cargoes that could be stored and transported to a new and existing gas receiving station (GRS), where they could be processed for use by nearby power plants.

The jet fire rated barriers would provide protection to workers at the import terminal in the event of a fire occurring. Due to Covid-19 travel and shipping constraints presented by the pandemic, the barriers would need to be fully designed and prefabricated in our facility in Malaysia, and then shipped to Hong Kong fully assembled and ready for installation.

Invicta would have to design and supply a demountable barrier system which could withstand a 30 minute Jet Fire (J30). Due to its position on the coast, it would also need to be corrosion resistant to C5-M conditions and typhoon wind speeds of 74m/s (266km/h).

Invicta successfully designed and fully prefabricated a 20m x 2.7m barrier, split into five separate modules. Each section was prefabricated and painted in Invicta’s workshop in Malaysia, with assurances made that all parts of the system would be installed according to its certified fire rated design.

Assembly was completed in less than two weeks with four operatives. The modules were carefully packed to avoid any damage during transit to Hong Kong. Once the modules arrived, the main contractor lifted the modules into position using a crane, and fixed them down onto the cast-in anchors.

Invicta’s Durasteel prefabricated fire barrier was quickly and successfully installed by the project’s main contractor without problems, and matching all of the anchor positions. 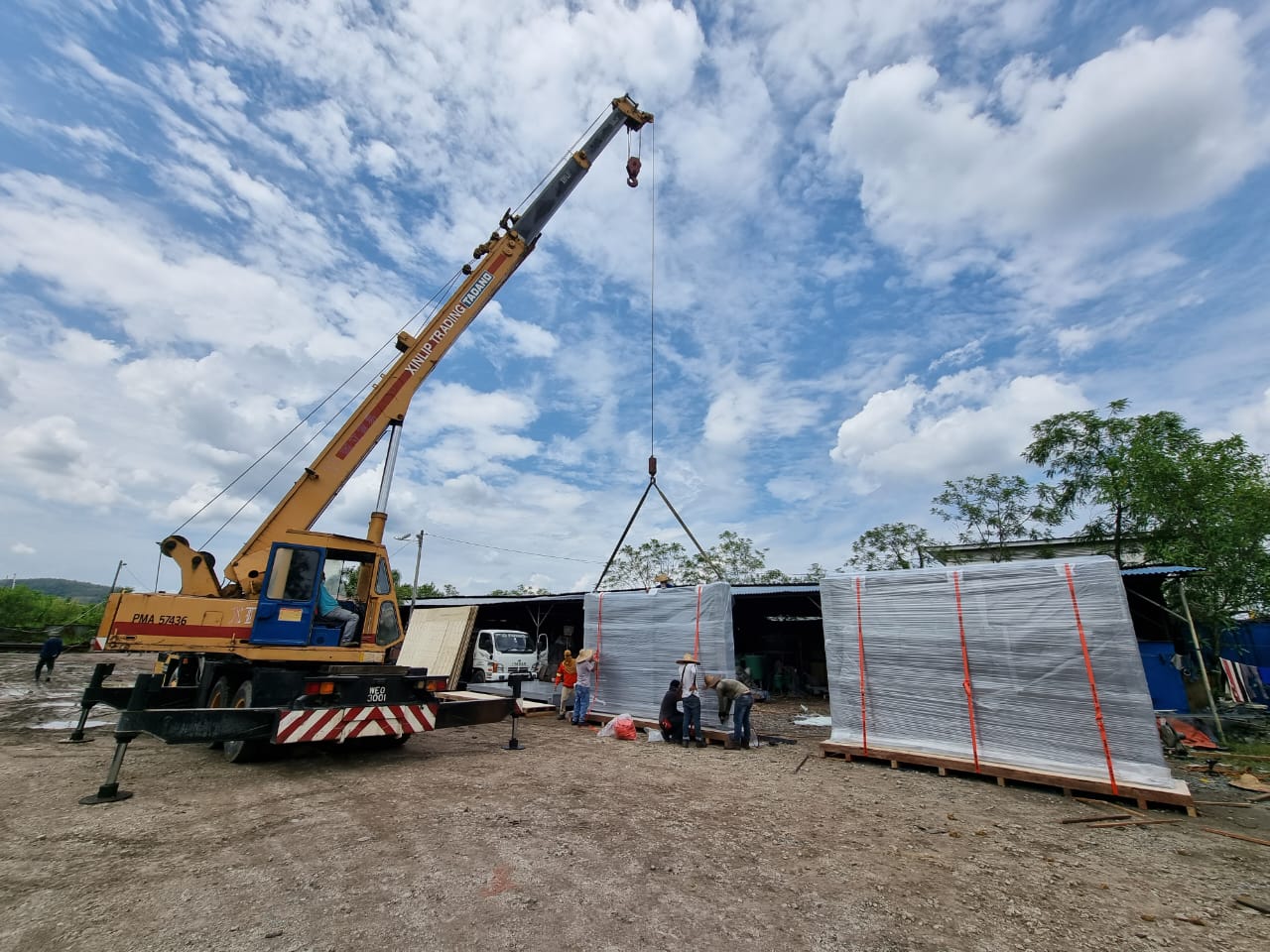 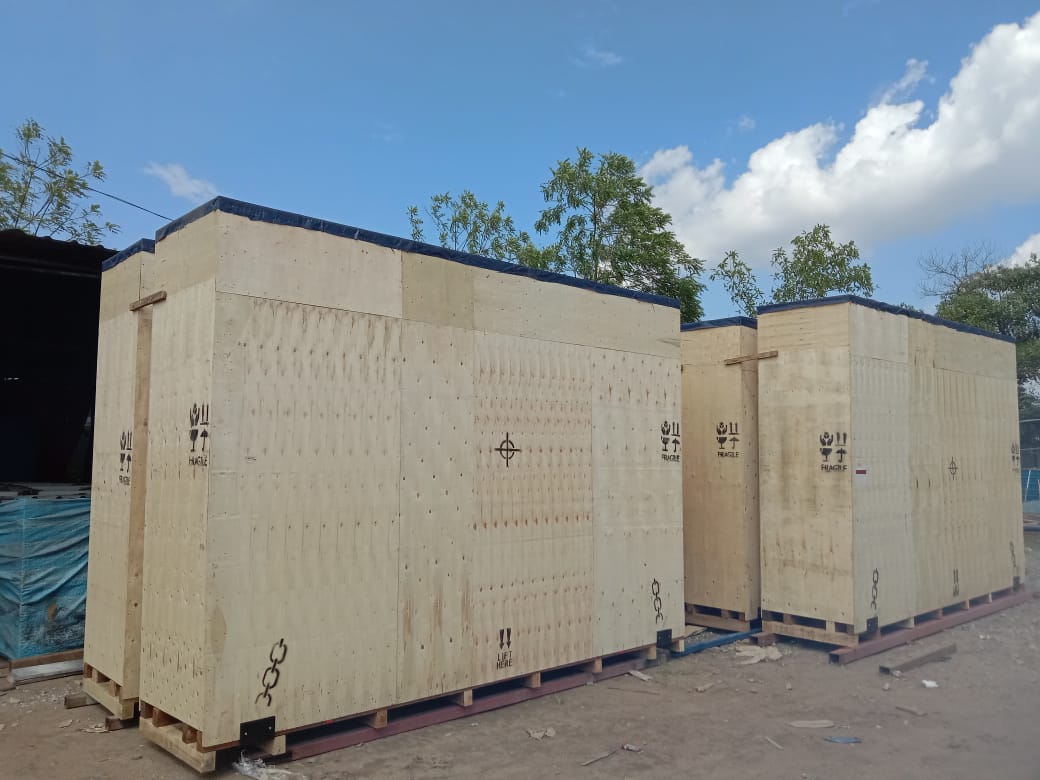 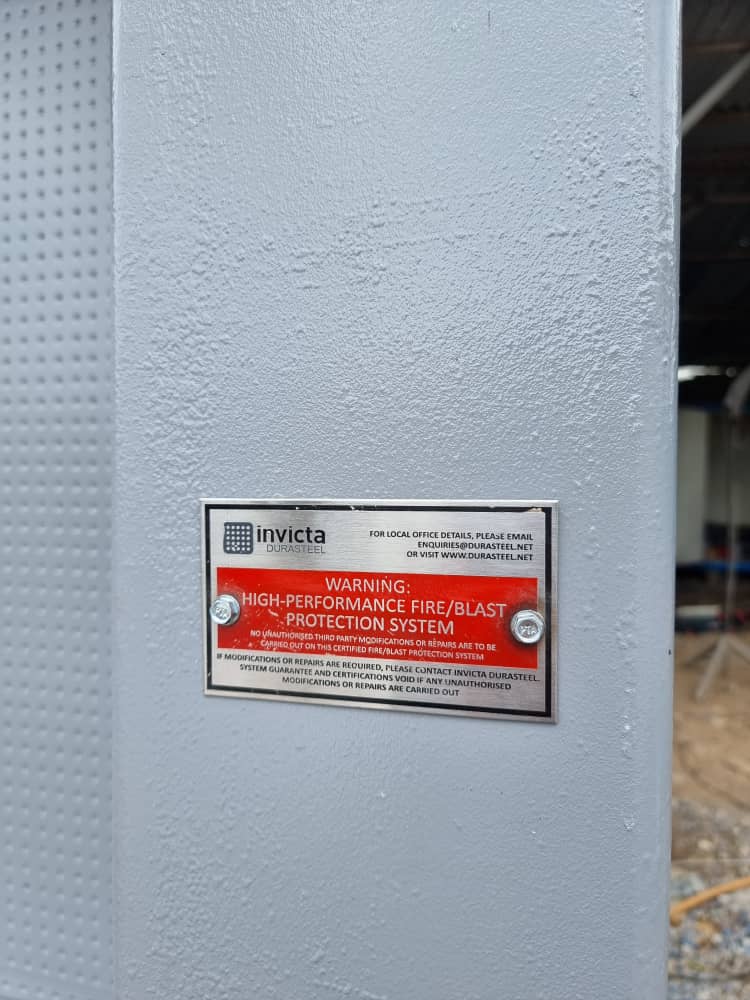 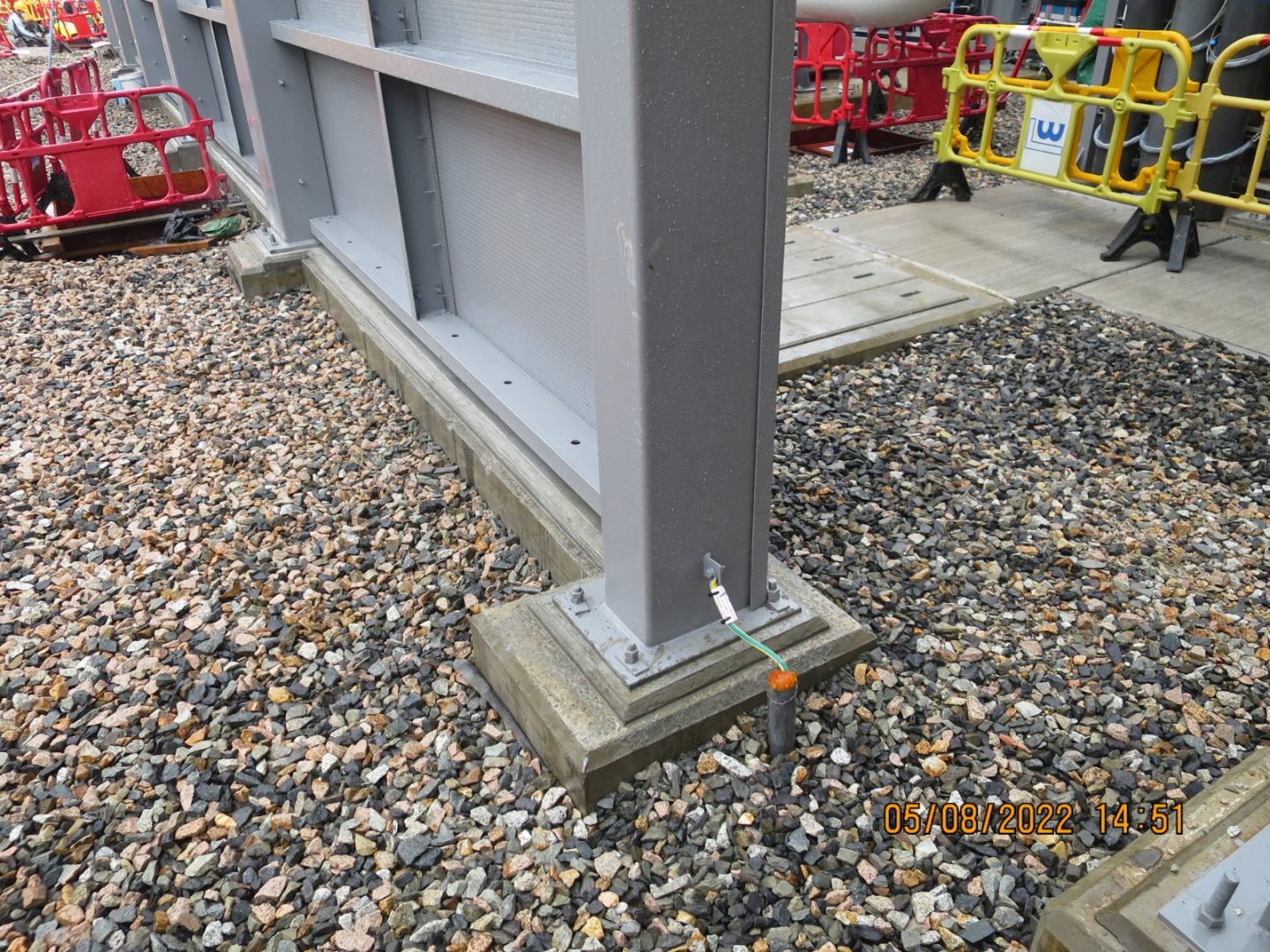 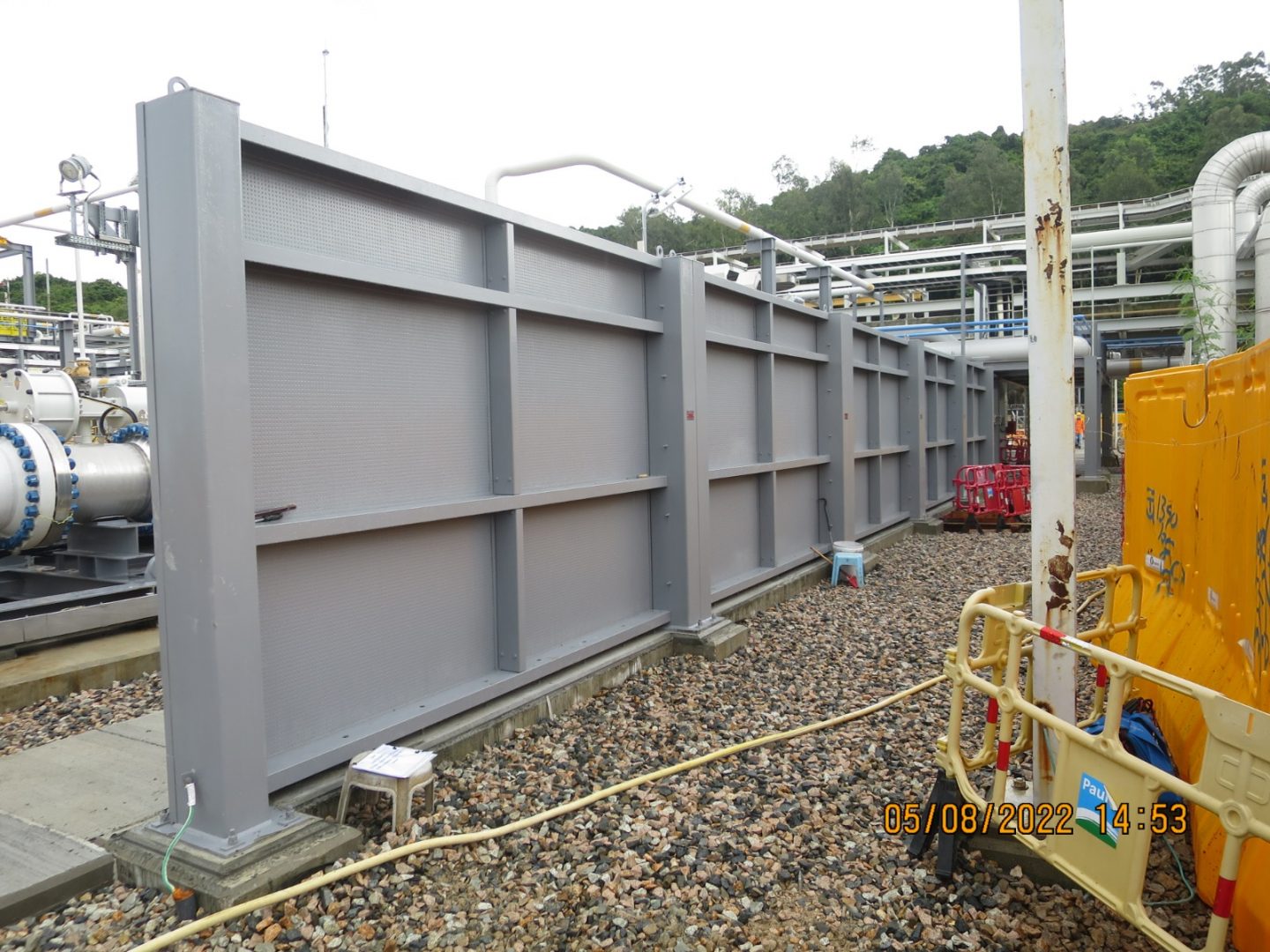 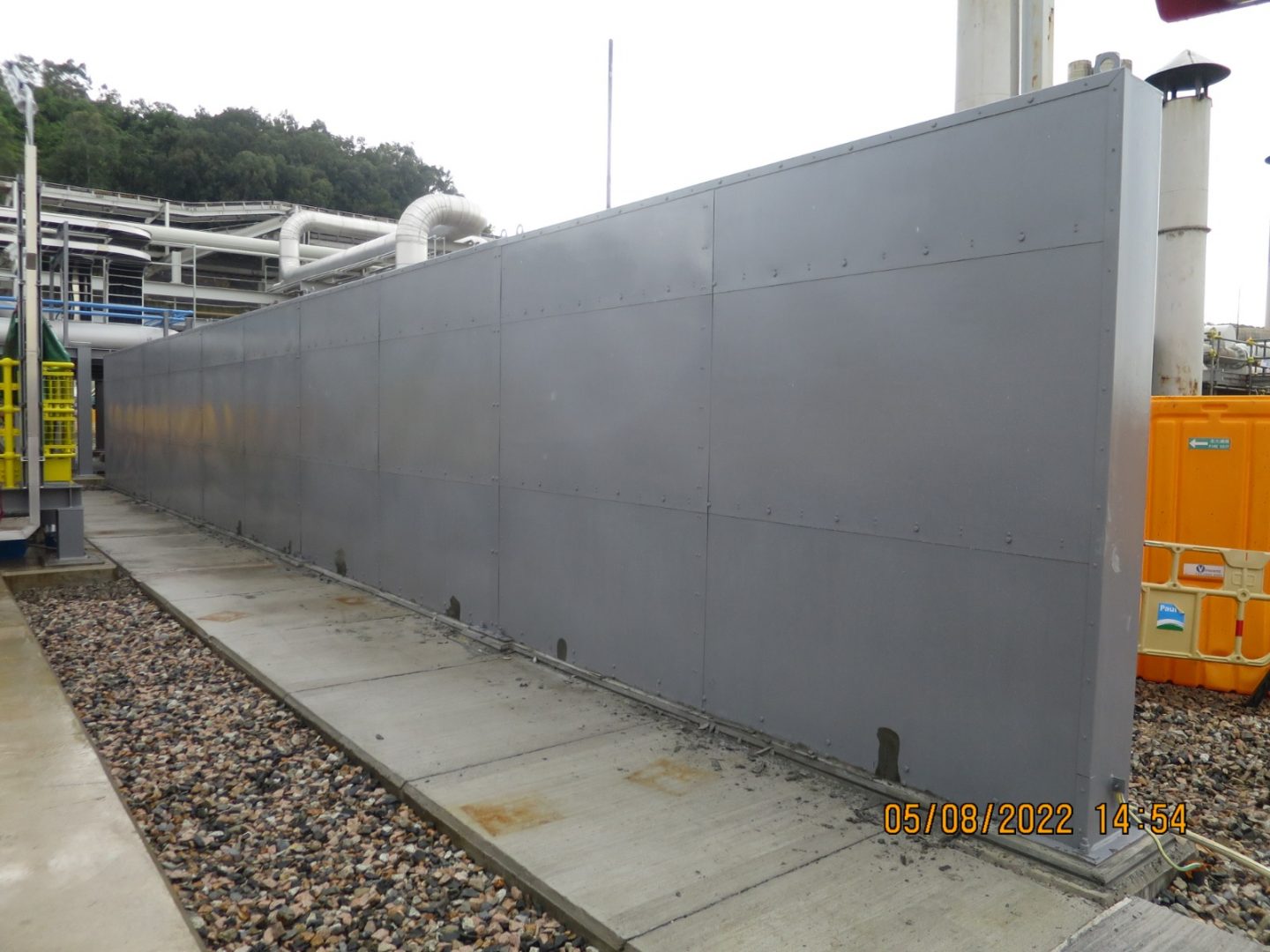